A cure for type 1 diabetes? by Professor Stephen Greene 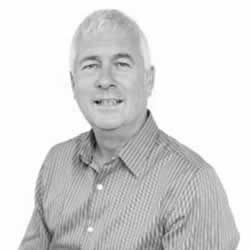 When meeting a young person and their family for the first time after their diabetes diagnosis, I am always asked if there is ‘a cure’. Indeed, this has been asked constantly since an insulin injection was first given to 14-year-old patient Leonard Thompson 100 years ago in Toronto, Canada. This first injection was viewed as an end to diabetes, and the phenomenal change in the health of people who developed diabetes appeared to confirm this miraculous event.

However, as people with diabetes will tell you, daily insulin injections – in whatever form, be it by once or twice daily long-acting insulin, pre-meal basal-bolus or pump-delivered insulin – is not a cure. The daily routine of injecting, monitoring blood glucose and matching the dose of insulin to daily activities and meal times can be a burden that many find difficult to manage 24 hours a day, 365 days a year.

The reason for not finding a cure is, despite decades of medical research, we do not yet know what causes so-called type 1 diabetes (T1D) in young people. What we do know is that T1D results in the destruction of the small beta-cells in the pancreas with the loss of insulin hormone in the body. This can occur rapidly, with some children presenting in the first year of life, or quite slowly, not declaring itself until the fifth and sixth decades of life. The most common time is in the second decade.

This is very different from T2D, where there is lots of insulin around but it just doesn’t work very well, a process known as insulin resistance. The reason for T1D appears to be a destruction of the beta-cells by the body’s own immune system – autoimmunity – but with no obvious trigger such as an antigen.

In the last three decades, a great deal of research has been undertaken to try and stop the autoimmune reaction, but without success. However, in the last year, two studies have raised some optimism, not necessarily to ‘cure T1D’ but to stop the complete destruction of the beta-cells. This would leave a small amount of the person’s own insulin in their body, and this appears to make the management of diabetes much smoother and the response to injected insulin much easier and more effective.

One study uses monoclonal antibody to preserve insulin secretion, the other uses high doses of one of the antibodies produced naturally. These studies are now in definitive Stage III randomised clinical trials, and some answers will be available in the next 2-3 years. One of our roles in the London Diabetes Centre at London Medical is to keep up to date with this type of research and, when the time is appropriate and safe, to use what is now only available in research studies on our patients.

So, a cure for T1D is not available at the moment, but keep watching this space!